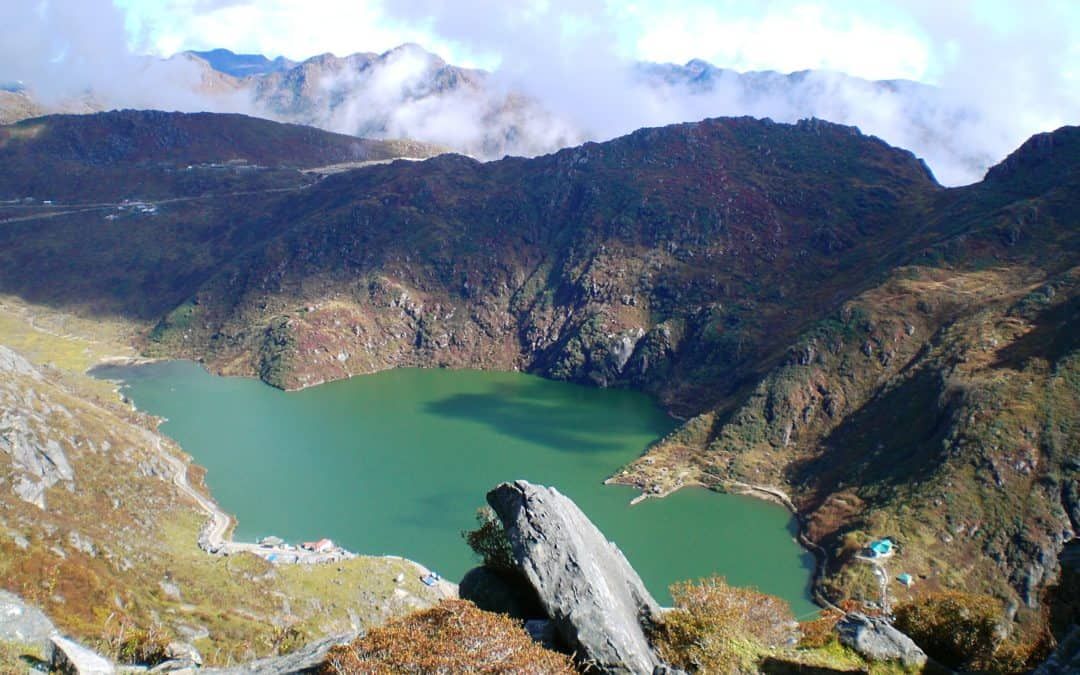 Every time my vehicle took a sharp turn, the best glimpse of nature’s beauty stirred a thrill and excitement in me. The adventurous route with well-built steep roads (except few bumpy encounters) made our journey full of amazement and fun and took us from the subtropical to the alpine zone.

A clear, pristine blue water body – in winter in the midst of ice-capped mountains; that day even the sun didn’t shy away to illuminate its enchanting beauty.

Tsogmo or Changu lake is one of the magnificent and picturesque landscapes of Sikkim which is considered sacred by both Buddhist and Hindu followers. The lake is situated at the height of 3753 m from the sea level and is known for reflecting different colours with the onset of different seasons. The Alpine forests around this oval-shaped lake is a home to rich varieties of flora and fauna. This lake is located in the restricted area on the way to Nathula pass (Indo-Tibetan border). Hence both Indian and foreigner need permit to visit Changu lake which can be availed only at Gangtok through certified tourism operators. You will find many stalls renting snow boots, gloves, jackets, gum boots etc. to battle against the cold weather.  Before heading to further upland, I would suggest you to savour hot tibetan noodle soup served at various stalls located near by Tsogmo lake. If you are looking for thrill and adventure then ropeway is waiting for you to hop on and glide through the wire lined between the awe-inspiring landscapes. These unforgettable moments are still fixed in my mind and get more intense when I see the pictures of this tour.

Tourist usually club Nathula Pass, Baba Mandir and Tsogmo lake for a day visit from Gangtok and sometimes extend it to Zuluk. On the way to Baba Mandir, you will come across many scenic sights and beautiful army cantonment with colourful shacks and buildings on one side of the road.

Baba Mandir was built to pay homage to the soldier named Harbhajan Singh who was sentry of Punjab regiment. It is said that he fell into a stream and drowned while performing his duties near the Indo-China border. After few days he reappeared in one of his colleagues dream and asked him to build a memorial on this place. Startling fact is, soldiers believe that his spirit is still around to save them from rough terrain and natural calamities. Even Chinese soldiers claim to have seen a turbaned sentry patrolling the border. He has been promoted to honorary captain posthumously.

My patriotism reached to sky when Tri-colour started fluttering to tune with national anthem being played to pay tribute to Indian army.

A must visit place for all Indians

This holy site is also adorned with panoramic view of mountain ranges, waterfall and glorious landscapes. I was lucky enough to see snow capped mountains with alpine trees resting in some places. Heavy snow shattered my plan to visit Nathula Pass for the second time. Although Sikkim is undeniably impressive in every season but certain seasons are preferred to explore this distinguished, marvellous and magical state of India.

I would recommend terralaya travels to organise your itinerary for memorable and hassle free journey. Or you can book the trip at Bamboo Retreat Hotel, a great place to explore Sikkim for those who enjoy staying out of the city. A comfortable ride and mouth-watering food along with all the permits will be arranged at your command.